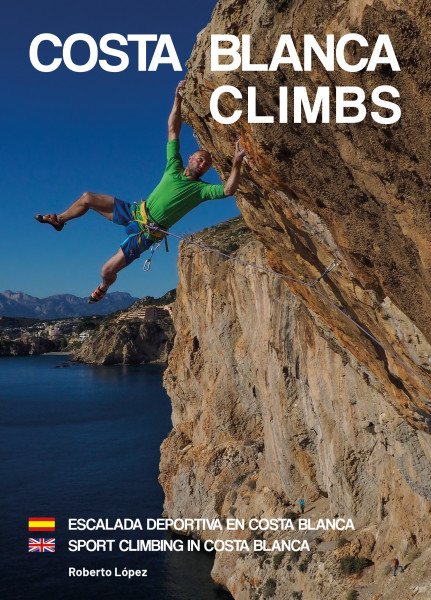 The Costa Blanca region is a true climbing El Dorado. The number of climbing areas and routes as well as the variety of climbing is simply incredible. The spectrum ranges from perfectly established single pitches and multi-pitches directly by the sea to alpine climbing in the hinterland of the coast.
The climbing guide Costa Blanca Climbs is limited to sport climbing areas and summarizes the current state of all areas from Gandia in the north to Orihuela in the south.
Although locally the development of existing areas or the opening of new ones no longer has the dynamism of earlier times, the revision of the climbing routes developed in the region, which is now available, was urgently needed. Spread over 58 areas, there are currently more than 3400 routes. The routes described are mostly well established single pitches, really long routes are not found in this guide - except for the classics at Penyón de Ifach, there the routes reach lengths of 300 - 400m ...

The climbing guide is very clearly structured and offers really every necessary information.
Introductory, all areas are characterized in detail in their specificity. This is followed by warnings, information on recommended seasons, detailed descriptions of the sometimes not always easy access to sensible parking options, access descriptions and access sketches including parking options (GPS coordinates via QR codes).
In pictogram form, there is then information on access time, wall foot, child friendliness, climbing style, wall slope, wall height, orientation, cell phone reception!!, sun exposure / time, ...
The topos are drawn in very well readable throughout on partly large-format color photographs.
Overall, a maximally content-rich and yet clearly designed climbing guide.