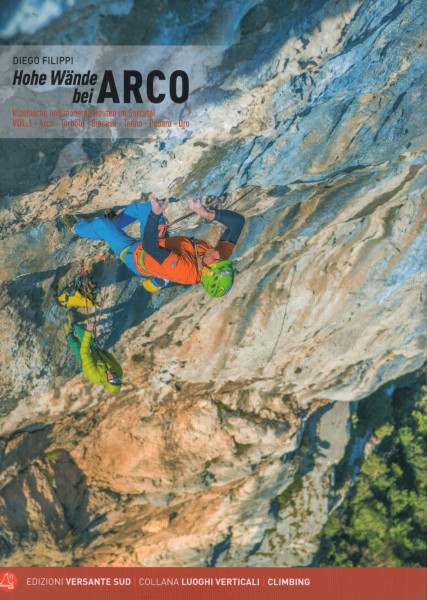 This fourth edition of the only complete guide of multi-pitch routes around Arco is the result of the deep passion of one of the leading characters of rock climbing in Valle del Sarca.
The main development is the remarkable expansion of the area described, which today ranges from the shores
of Lake Garda all the way to the Valle dei Laghi: 23 new sectors for a total of 260 unpublished routes, which added to the 520 routes already present in the last edition makes a total of 780, spread around approximately 33 sectors.
As a result of such an abundance of lines, we have decided to divide the guide into two volumes, presenting in this first volume, the part which today has more new routes: the area which includes the lower part of Valle del Sarca, the rock faces which persist across the plain of Arco and Lake Garda.
Among the many surprises of this volume you will find the new routes on the Coste di Loppio near San Giovanni pass, in val di Ledro and the not so popular valley of Volta di Nò, where new interesting routes are still being opened.

In the second volume we will deal with the rock faces which loom over the Valley near Sarche and Pietramurata and which continue towards Valle dei Laghi, where the new routes are still very much in evolution: the possibility to set up routes on the rock faces of Fraveggio, as on the rock faces in the Limarò canyon are anything but finished.

"Kletterführer Hohe Wände bei Arco - Band 1"
Similar products
Similar products
climbing guidebook Klettern in Arco
€35.00 *
Viewed
This website uses cookies, which are necessary for the technical operation of the website and are always set. Other cookies, which increase the usability of this website, serve for direct advertising or simplify interaction with other websites and social networks, will only be used with your consent. More information
Decline Accept all Configure