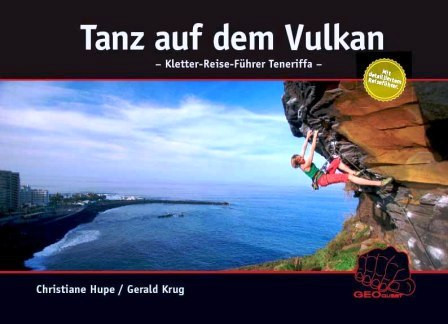 Dance on the volcano

The Geoquest think tank (in the person of Christiane Hupe) has come up with a globally unique and new book concept: the ClimbingTravelGuide. In addition to climbing information, the guide offers detailed tourist information, which is assigned to the nearest climbing areas, making it perfect to use rest days in a relaxed and eventful way. It is therefore also suitable for families or groups, only some of whom want to climb, while others want to visit sights, go hiking or visit one of the island's adventure parks.

Extensive tourist information includes maps of the described hikes and city maps. In addition, there are info texts on many interesting topics such as the plants, the animals, the water balance, geology, etc.

In addition to access by car, an access option by public transport is also described, as well as detailed access and further Internet information. Each area is provided with GPS data, so that a navigation system can also be used. Further information of the pictograms are: Sun exposure, altitude, number of routes according to the three difficulty ranges, child-friendliness, wall inclination, possibility of self-securing routes.

The climbing routes are color-coded in the phototopos in 3 difficulty ranges: blue for easy to 5 (French rating), red for moderate to 6c+ and black from 7a. This coding is used for the lightning-fast detection of suitable routes analogous to the already known coding of ski slopes.

Bouldering opportunities are also described in the book.

"Climbing Guide Tenerife"
Similar products
Similar products
climbing guidebook Escalada en Tenerife -...
€30.00 *
climbing guidebook Ibiza Sport Climbs
€28.00 *
climbing guidebook Mallorca
€40.00 *
Sport climbing Menorca
€25.00 *
Sport Climbing Guidebook in Gran Canaria
€26.00 *
Viewed
This website uses cookies, which are necessary for the technical operation of the website and are always set. Other cookies, which increase the usability of this website, serve for direct advertising or simplify interaction with other websites and social networks, will only be used with your consent. More information
Decline Accept all Configure