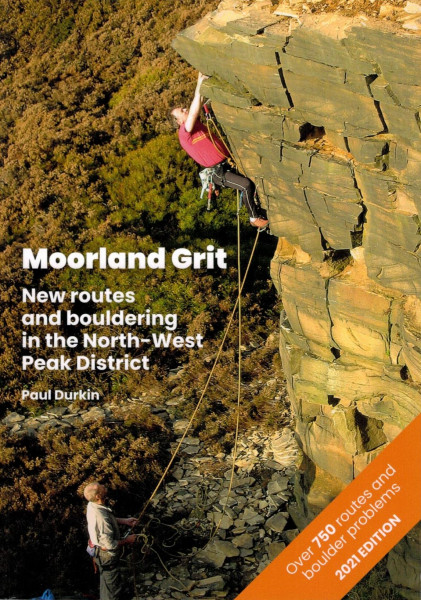 The popular climbing areas around Glossop and the north-west Peak District have been written about in many guidebooks. Moorland Grit by Paul Durkin features those lost and hidden crags often overlooked by previous explorers and scribes.
Quality rock does abound and there are many ticks that are tucked away in secluded areas and high on moor edges for those who want to get away from it all. Featuring 340 routes from Mod to E3 and 425 boulder problems with full colour action photography.
Paul Durkin is a confirmed Yorkshireman from Yeadon, serving his climbing apprenticeship on the local cliffs of Caley, Almscliffe and Ilkley, with winter forays to the Lakes and Scotland. A degree in civil engineering at Sheffield was followed by thirteen years in Shaw, Oldham, where in 1980 he met Glossop climber Malc Baxter, resulting in many a climbing adventure from Lundy to Barrow-in-Furness, forging a lifelong friendship. It was Malc who encouraged Paul up his first E2, Indy 500 (unfortunately now downgraded to E1), on Lundy after both of them soloed The Devil?s Slide.
Three alpine trips and a visit to Yosemite were fitted into a career with Oldham MBC before a move back to Sheffield in 1992 to work for Mott MacDonald, which put the Peak District within easy reach. It was about this time that he started climbing with Sheffield climber Simon Royston. Paul is a keen climber, but has never considered himself a hard climber, E3 being his hardest trad route leads, but that has still left plenty to do!
In 2007, together with Baxter and Royston, they began exploring out-of-the-way little or unknown crags, searching for new routes, which resulted in the Moorland Grit guidebook. After retiring as a technical director from Mott MacDonald in 2019, keeping bees now keeps him busy along with continuing the search for more esoteric crags
190 pages
language english
edition 2021

"climbing guidebook Moorland Grit"
Similar products
Similar products
Climbing Guidebook Eastern Grit
€42.00 *
Viewed
This website uses cookies, which are necessary for the technical operation of the website and are always set. Other cookies, which increase the usability of this website, serve for direct advertising or simplify interaction with other websites and social networks, will only be used with your consent. More information
Decline Accept all Configure