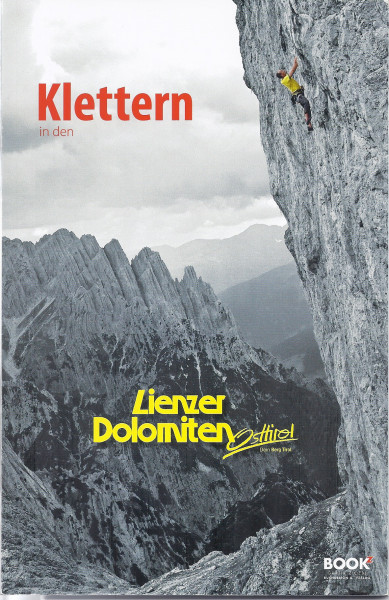 Climbing in the Lienzer Dolomites

South of the main Alpine ridge lies the Dolomite town of Lienz - framed by a magnificent mountain backdrop, with the mighty Lienz Dolomites right on its doorstep. For a long time, these rock formations were only known to insiders. In the meantime, the limestone massif presents itself as a true climbing paradise. Today, all types of climbing can be found here - from via ferrata, sport climbing routes from plaisir to extreme as well as classic alpine routes.

The climbing guide presents a selection of sport climbing gardens as well as alpine climbing tours of the Lienz Dolomites.
The 2nd edition of the guide now includes over 500 sport climbing routes of all difficulty levels in various climbing gardens of the region.
All climbing gardens are described comprehensively in the introduction. You will find all the necessary information such as sea level, orientation, rock, number of routes, protection, type of climbing, seasons, wall height, ... In addition, there is a diagram of route distribution by difficulty. The approach sketches are useful, as are the topos sketches that follow.
The 2nd part of the guide belongs to the alpine climbing routes in rock faces of large climbing mountains such as Roter Turm, Große and Kleine Laserzwand, Kleine Gamswiesenspitze, Törlspitz, Simonskopf, Teplitzer Spitze and Seekofel.
All alpine routes are described in detail in text form. In addition to good drawn topos, there is a color photo of the corresponding wall for each tour with the route marked.

"Lienzer Dolomiten"
Similar products
Similar products
Climbing Guidebook East Tyrol
€38.00 *
climbing guidebook Climbing in Carinthia and...
€22.90 *
Viewed
This website uses cookies, which are necessary for the technical operation of the website and are always set. Other cookies, which increase the usability of this website, serve for direct advertising or simplify interaction with other websites and social networks, will only be used with your consent. More information
Decline Accept all Configure