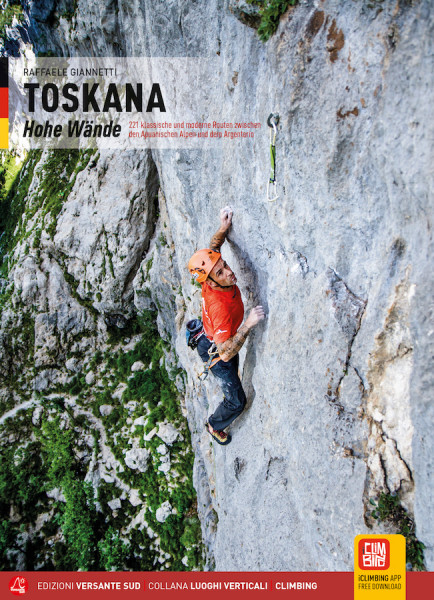 221 classic and modern routes between the Apuan Alps and the Argentario
In the collective stereotype Tuscany represents cities of art, the Chianti hills, seas, islands, its archipelago. The Apuan Alps are the marble quarries.
For those who climb in Tuscany and in the Apuan Alps they are a splendid island of limestone rock not only with the immense crags of Camaiore, but also the wild valleys which hide the large rock faces on which the history of this region’s alpinism runs up. History which continues to live and renew itself with new routes opened in a modern style, using bolts, which alternate with the great classics. Some routes are immersed in untouched nature, others are wedged in between the devastation of the white marble quarries. A few of these routes carry important names and have taken part, in their own small way, in the long fight lasting decades, to save this paradise from the massacre of the extraction industry.
From the 1000 metres of Pizzo d’Uccello’s north face, to the more modern routes along Procinto, to the high difficulties on the imposing face of Nona. In this journey between mountain and sea, we will visit the rocks overlooking the blue sea of Argentario, exploring Tuscany’s climbing from north to south.
208 pages
language german
edition 2021