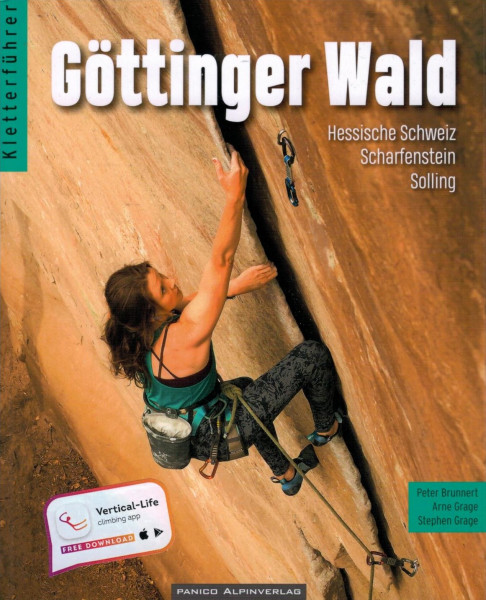 The sandstone climbing areas in the Göttingen area were actually always a secret tip, information was only passed on by hand, here and there a topo circulated on the net, but official detailed information was not available. Some rocks are also threatened by closure.
In the 2nd edition of the climbing guide, all existing possibilities around Göttingen as well as the best destinations in northern Hesse are summarized in a handsome guide. Who wants to climb there: the status quo of the GÖ forest climbing is documented only here.
Remarkable: almost 100 pages thicker than the first edition, about 250 previously unpublished new tours! With the Scharfenstein - Basalt! - and the Solling Quarry, two completely new areas find their way into the climbing guidebook. The former is the most important climbing area in northern Hesse, the latter is a sandstone spot near Fürstenberg that is still largely unknown. So there's plenty to keep you excited. Not to forget: The book was of course also completely newly illustrated.
The comprehensive guide provides clarity on the currently existing regulations, so you know on which rocks you are allowed to climb and on which not. The authors point out at every single rock whether climbing is allowed, tolerated or currently prohibited there and hereby expressly ask for unconditional respect of the closures. And now off to Göttingen!
The described crags or areas in the climbing guide Göttingen Forest & Hessian Switzerland: Mariaspring, Knubbelwand, Hauwand, Schlageterstein, Schaukelwand, Appenroder Wand, Rote Wand, Leuchtetal, Die Türme, Freie Klippe, Reiffenhausen, Arenshausen, Hessian Switzerland
310 pages
Language German
Edition 2022

"climbing guidebook Göttinger Wald & Hessische Schweiz"
Similar products
Similar products
Harz Rocks 1 - Okertal
€34.00 *
Climbing Guidebook Harz Rock 2
€39.90 *
SteinReich Kletterführer Thüringen
€29.90 *
climbing guidebook Hoch im Norden
€44.80 *
Bouldering Guidebook Harz Block
€32.00 *
Viewed
This website uses cookies, which are necessary for the technical operation of the website and are always set. Other cookies, which increase the usability of this website, serve for direct advertising or simplify interaction with other websites and social networks, will only be used with your consent. More information
Decline Accept all Configure