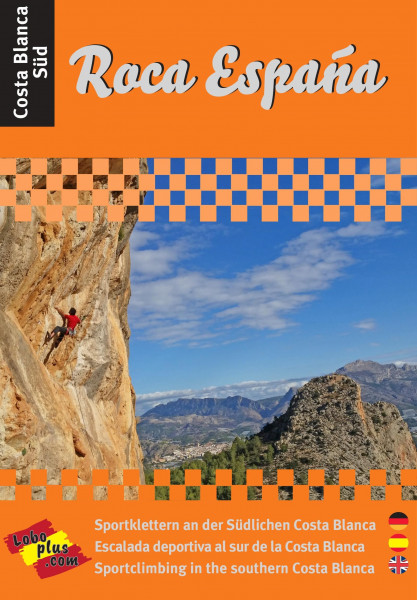 Description
Description
The southern volume covers the areas from Calpe in the north to Orihuela in the south and the... more
Close menu
Product information "Roca España Costa Blanca Süd"

The southern volume covers the areas from Calpe in the north to Orihuela in the south and the complete hinterland to Alcoy. In addition, it presents two border climbing areas in the northern province of Murcia.

After the success of the "Costa Blanca North" - climbing guide, many climbers have had to wait a long time for the southern volume of the Costa Blanca. The first research began already in autumn 2012 and dragged on tremendously. After the century - storm in the winter of 2017, the authors visited almost all areas again and reviewed, corrected and supplemented many routes and information.

As in the northern volume, they also tried to present in the southern volume, especially unknown and unpublished climbing areas. Let's start the tour in the extreme southwest near Orihuela. In the Sierra de Orihuela they describe the three unknown areas Sudamérica, Vallecito and Pirámide. Further east, the authors focus on the well-known sport climbing sectors at Redován and Callosa de Segura. In Vinalopo, they show the current status and present the new Rincón Bello area, which was created with the support of the LoboPlus Bolt Fund. In the mountainous hinterland near the town of Alcoy, they present for the first time in print all sport climbing sectors and the top area Mas de Penya with the hard endurance routes above Cocentainas. Let's switch over to Sella. There the authors show you all the new sectors and all the new areas and sectors like the Cueva del Aqua, Morro Carlos and Mundo Perdito. They describe all the sport climbing crags near La Nucia and around Guadalest. In the hinterland of Callosa d'en Sarrià they publish for the first time Bolulla, Cereza and some other secret tips. At Fuente del Agar they present the climbing area of the same name, also created with the support of the LoboPlus Bolt Fund. And in the far north, near Calpe, they present the Serra de Bèrnia, Altea and Mascart. Not only the extreme climber, but also the pleasure climber and beginner will find in this climbing guide many destinations and suggestions and not only for a vacation.

Once again they were able to improve the climbing guide in several crucial details. With new photo and drone technology, they have succeeded for the first time in creating a climbing guidebook in which all routes can be shown on detailed photos. They have once again improved and added to their proven pictograms. In addition, they rate access and access by car with a uniform color code that provides information about access difficulties. The exit parking spaces can be reached via accurate - GPS data. Alternatively, a parking lot - QR - code is available, which can be scanned with a cell phone. All sectors have GPS - data, and detailed access maps in different scales greatly facilitate orientation. The text is trilingual throughout in German, Spanish and English.

"Roca España Costa Blanca Süd"
Similar products
Similar products
Escaladas en el Litoral Murciano
€33.00 *
Levante Climbs South
€25.00 *
Viewed
This website uses cookies, which are necessary for the technical operation of the website and are always set. Other cookies, which increase the usability of this website, serve for direct advertising or simplify interaction with other websites and social networks, will only be used with your consent. More information
Decline Accept all Configure