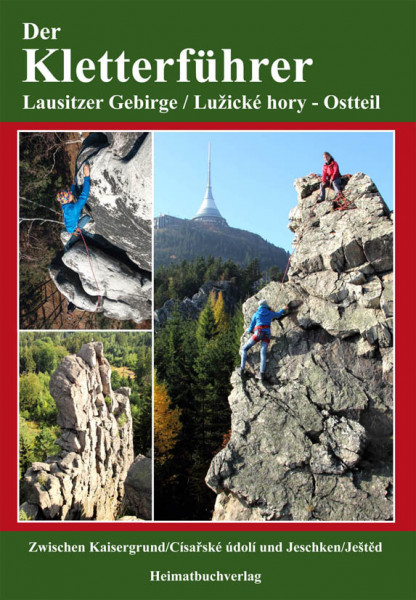 The new climbing guide for the Lusatian Mountains / Lužické hory is also the first volume to be published as a new edition for this wonderful mountain range by Heimatbuchverlag.

A total of ten climbing areas are presented. A total of 1,563 climbs at 209 climbing destinations have been included in the book. Numerous crags are presented on separate ascent sketches or topo sketches.
The individual climbing areas in northern Bohemia include the rocks in the eastern part of the Bohemian Central Uplands/České středohoří, Lusatian Mountains/Lužické hory and Jeschken Mountains/Ještěd.

As with the climbing guidebook for Northern Bohemia already published in 2003, climbing destinations made of non-sandstone are presented this time as well. In the "eastern part" this concerns in particular the rocks of the Jeschkengebirge/Ještěd, which in the recent past have been wonderfully furnished with new bolts, abseil rings and summit books by Czech mountaineering friends. Especially mountain lovers of medium difficulty will get their money's worth here.

But also sports fans of higher difficulty ratings will find numerous destinations in the revised climbing guide. Among them are the Mathauschwand, the Fellerkofel, the Oberwegsteine and the Rabensteine, which also offer ascents up to the 10th degree of the Saxon/Bohemian difficulty scale.
On the already mentioned Mathauschwand, the approaches are also equipped with numerous bolts in the best sport climbing manner.

Individual climbing crags or groups of crags, which have a larger number of ascents, are shown on so-called ascent sketches (bird's eye view) and topo sketches (side view) for better orientation.
The mountain lover should pay special attention to the pictograms listed next to the rock name. These give further important information, which should help in the selection of the rocks to be visited, in a short and easily understandable form.
An innovation in the presented climbing guide is working with QR codes. With their help, a variety of additional information on the individual climbing areas, such as access, parking, rock or closure times, can be accessed via a separate website.

"Kletterführer Lausitzer Gebirge - Ostteil"
Similar products
Similar products
NEW
Kletterführer Lausitzer Gebirge - Westteil
€24.90 *
climbing guidebook Hejszowina
€14.00 *
Viewed
This website uses cookies, which are necessary for the technical operation of the website and are always set. Other cookies, which increase the usability of this website, serve for direct advertising or simplify interaction with other websites and social networks, will only be used with your consent. More information
Decline Accept all Configure